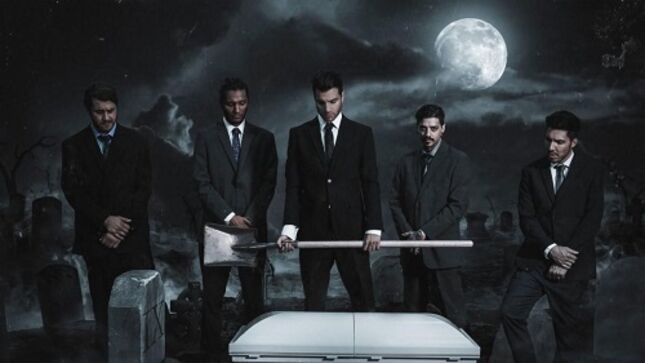 Slashercore outfit, Ice Nine Kills have dropped the fourth and final new track from their upcoming album, The Silver Scream 2: Welcome To Horrorwood, prior to its release this coming Friday, October 15th via Fearless Records.

The offering submitted into evidence is titled “Funeral Derangements” and is inspired by the Stephen King horror classic, Pet Sematary. The accompanying music video features Horror icon Bill Moseley (The Devil’s Rejects, House Of 1000 Corpses), a show stopping cameo from Miko Hughes, the actor from the original 1989 Pet Sematary, a cameo from Josh Katz from Badflower portraying the undead Victor Pascow and James A. Janisse and Chelsea Rebecca creators of the wildly popular Dead Meat James “Kill Count” YouTube series. Stream the track here and watch the official music video below.

Ice Nine Kills frontman and driving creative force, Spencer Charnas shares:”In perhaps the most ironic cameo in recent horror memory, we’ve tapped the amazing Miko Hughes, (Gage from the original Pet Sematary), to play the role of the reckless truck driver. An 18 wheeler, a twisted cat, a scalpel and an evil burial ground all come together in what I’d call our most ambitious homage yet. Dig in…”

No matter how many advances there are in cinematography, practical effects, or CGI, there’s a single scene in the 1989 adaptation of Stephen King’s Pet Sematary almost unrivaled in its shockingness, and things only unravel for the characters from there. The story involves a burial ground capable of reanimating the dead, though the versions of pets (like Church, the family cat) and people that return are devastatingly malevolent. John Feldmann cowrote the track, lending a Bad Religion-style anthemic vibe. Bassist Joe Occhiuti spent time on the tour bus working on discordant noises to match some of the movie’s frightening animalism. It also contains some of the best lyrics of Spencer Charnas’ career, including, “It all began with a skid on the pavement / it ends now with Funeral Derangements / the flesh is living, but the souls have spoiled / the wrath of God lays beneath the soil.” Cue the mosh pit going wild.

A sequel of franchise proportions to the # 1 Billboard Hard Rock Album The Silver Scream, The Silver Scream 2: Welcome To Horrorwood doubles down in pursuit of the anthemic band’s cinematic muse.