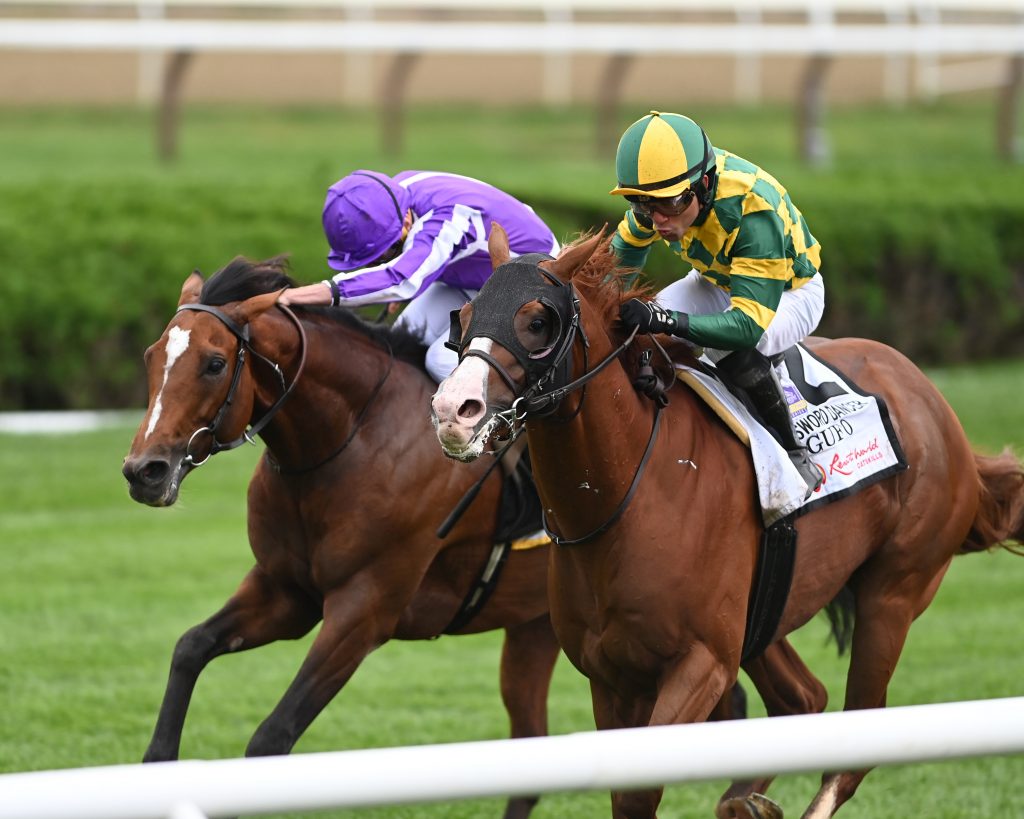 SARATOGA SPRINGS, N.Y. – Otter Bend Stables’ Gufo continued his career-long stretch of ultra-consistent efforts when holding off Japan for a neck victory in the Grade 1 Resorts World Casino Sword Dancer on Saturday, improving his career ledger to 7-2-3 in 12 races.

Gufo, bred in Kentucky by John Little and Steve Cainelli, earned a personal-best 104 Beyer for his second career Grade 1 victory and first since the Belmont Derby Invitational in October. He cracked triple digits for the second time in three starts after garnering a 100 for his third-place finish in the Grade 1 Manhattan on Belmont Stakes Day June 5.

“He came out of his race in very good shape, and I was very proud of him. He looks very good this morning,” Clement said.

Clement added blinkers to Gufo before his start in the Grand Couturier going 1 1/2 miles on July 5 at Belmont. After winning that contest by one length, Clement kept the blinkers on, with the 4-year-old Declaration of War colt responding by rallying from last-of-7 under jockey Joel Rosario to make a strong three-wide move in the upper stretch before digging in.

“We put the blinkers on and it helped Joel get in better position,” Clement said. “It put him more in contention to run a better race.”

Reeves Thoroughbred Racing and Darlene Bilinski’s Senbei improved to 2-for-2 with a 2 3/4-length win in the Funny Cide during New York Showcase Day.

Bred in the Empire State by Dr. Jerry Bilinksi, Senbei went gate-to-wire to capture the 6 1/2-furlong main track sprint. Clement said he has not picked out a next spot yet for Senbei, who won his debut by 4 3/4 lengths on July 18 at Saratoga before going 2-for-2 at the prestigious summer meet.

“He came out of his race perfect. I was very impressed,” Clement said.

Senbei was a $280,000 purchase at the 2020 Keeneland Association January Horses of All Ages Sale.

Clement’s 1-2 finishers in the West Point presented by Trustco Bank on New York Showcase Day both are set for fall spots at Belmont, Clement said, with City Man targeting the $125,000 Ashley T. Cole for state-breds 3-years-old and up going 1 1/8 miles on the turf on September 24.

City Man, owned by Reeves Thoroughbred Racing, Peter Searles and Patty Searles and bred by Moonstar Farm, bested stablemate Therapist by a nose on Friday in the 1 1/16-mile turf stakes.

Clement said he will likely run Oak Bluff Stables’ Therapist, who earned his first stakes black type in five attempts dating to his win in the 2020 Artie Schiller in November at Aqueduct Racetrack, back at Belmont as well.

Therapist has registered Beyer numbers of 90 or greater in 10 consecutive starts dating to June 2020.

Photo: Gufo (on the rail) winning the Sword Dancer. (NYRA/Coglianese)